The big news was my wife buying a car (a used Prius). Faced with the prospect of being new parents and needing to go downtown for doctor’s appointments while still being at the in-laws’ house we decided that spending 1.5-2 hours each way on transit was not feasible. The good news for me is being able to visit the donkey sanctuary (although 2 attempts have been foiled by weather and traffic). It will also mean some travel to visit family and being able to do bulk grocery shopping, but won’t get used much otherwise once we’re back downtown. We named her Sarah, so that we don’t take her, or what benefits she brings to our lives, for granted.

And in a perfect example of why we’ll need Sarah, my dad drove 3 hours to see us, stayed for lunch, then drove back home.

As soon as I was ready to give up DM’ing I switched to running introductory games and there’s suddenly 8 people wanting to play. Running games on 2 nights is exhausting, and prepping 2 sets of adventures digs into my pleasure reading time and energy. Also sapping my enthusiasm has been proposed changes to organized game play. It’s been announced, but the exact rules and how they’re going to affect what people have already done is unclear. It’s been a major issue not knowing if there’s any point to how I’ve been spending my time. Also, the new rules don’t really address what the stated goals are, while also introducing major changes. It’s been a badly handled situation, that seems to be about someone getting their pet rules in regardless of whether it’s the best way to go about things. This could be the moment that 5th Edition D&D loses its appeal for many people.

I finally got my mines terrain from an old Kickstarter. It looks like it will be fun to play with. I think if I continue with anything it will be worth my time to get a 3d printer and not have to wait 2 years for the inevitable problems of small operations getting overwhelmed or the issues with large scale manufacturing in China. Check the July recap for what some of it looks like painted.

I don’t think I got any books this month (not including Kickstarter magazine subscriptions). A shocker, I know. I’ve been reading a bit, too.

I discovered the Metis in Space podcast, which has been immensely enjoyable to listen to. I’ve also managed to listen to a ton of audio books via the library.

I did a little miniature painting… more of the regular townsfolk. 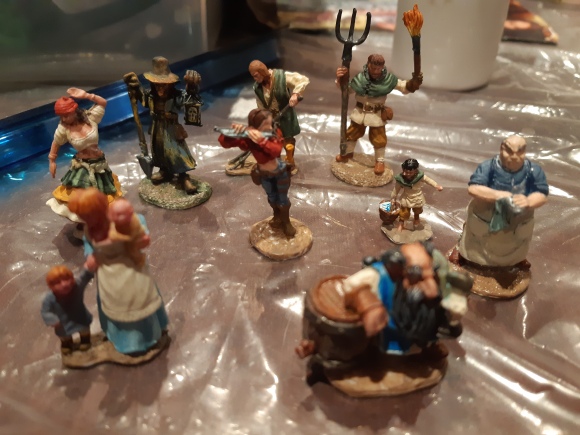 And a sneak preview of my planned Rampage diorama . My wolf is missing.

I discovered my current neighbour is a vintage car nut and the cats were super cute.

Gemma Files started a short weekly newsletter of interesting reads and viewings that is quickly becoming indispensable. I’m unsure where all she’s sharing it, but I’ve been getting it via Facebook.

Gemma files has pre-orders up for her next collection with Trepidatio, Drawn Up From Deep Places, and will be teaching a Lit Reactor Course in September.

August 15th is the ChiSeries mortified readings event. Last year’s was so good.

The Tablescapes stuff is so fun I’m even debating getting in on the new Dwarven Forge kickstarter ending next week (just for that huge piece and ice bridge near the top of the page because it’s just too expensive).