I just finished (I started this post just after,  but it’s now 2 weeks later) a last gasp of gaming, DM’ing 4 sessions of Adventurer’s League D&D, and playing in 3 over the past weekend. My wife spent the time on a writing retreat. I’m getting old enough that no matter how fun a 6 hour session of gaming ending at 3am is, the end result is I’m wrecked. Looks like I’ll be 2 recaps behind.

This was my first time getting a hotel for a convention, and I’d probably rather get a nearby room discounted (and need to walk a bit farther) than pay a ridiculous price to be able to stumble to bed one night. There were lots of other issues too.

The convention itself was difficult because of the number of back-to-back events I had. I would request changes to my DM schedule if I were to do this again (not likely), but my playing choices were limited as well. Definitely more of a break between events would be good. Food and bathroom breaks need strict planning when you’re DMing – it’s much easier to step away as a player if you need a snack or bathroom break. Especially with many adventures being difficult to run in allotted times.

I got to run one adventure twice – each time a different experience. I quite enjoyed Vault of the Devourer. The first time time was with a group seven friends, all at a high level. I had to throw wave after wave of monsters at them, they ignored a whole wing, but still managed to successfully complete a VERY difficult adventure right at the last minute. The other group was smaller and less experienced, but managed to clear the dungeon with lots of time.

The best time of the con was with one person in my regular gaming group, and a few people I just met for the season 7 tier 1 intro. It took 6 hours, and we only completed 3 of 5 mini adventures but it was a lot of fun. Lots of roleplay, and a relaxed atmosphere. It helped that as people disappeared from the room, I didn’t have to talk as loudly. I’m still hurting.

I ended up playing the first three of four (actually six – two more got released in early April) tier 3 adventures, and for the most part, the experience left me feeling better about my DM skills, the amount of work I did to prepare for adventures, and the experience I provided. Seeing so many adventures together just highlighted how poorly some of them work. Like the last adventure I ran, A Walk in the Park. Avoid that one if you can. There is minimal player agency, nonsensical design (the quest giver runs away from the players), mostly a bunch of rolls for players to make and DMs to explain.

My first 5e character, Magnus Perrywhimple, did get to ride a dragon though… 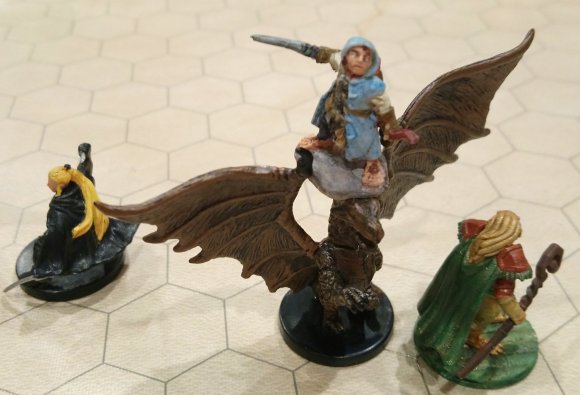 And related to gaming…

Some friends of mine are doing a little Kickstarter for their printable 3D terrain for the fortified Whitewood Abbey. They (Infinite Dimensions Games) were at Breakout right before the launch. The funding period is up on the 20th of April. You too could play in a world inspired by our GURPS campaign – though probably not anything close to what we did unless things get more established. Also, if you ever wanted to game in Candlekeep, this might be the closest thing to that.