Of course, I got New Books:

Nicole Cushing – The Sadist’s bible. I got my digital copy as soon as the Kickstarter funded and payment cleared.

Black Wings III. Undoubtedly worth it at used prices.

I spent a lot of time watching Shudder, which finally became available in Canada. You can see a lot of the movies I watched on that site (and more) in my last post.

The kitten, Gigi, revealed that she is in fact part dog. She LOVES playing fetch and will do so for hours. She makes “goblin noises” when she’s really into it. Little grunts for effort.We’re taking votes on a nickname: “Gremlin,” “Banshee,” or ” Little Monkey.”
When she’s in solitary, I’ve been reading her an Adam Ant bio, which is not particularly weird. She doesn’t pay his sex life much attention. In the 2 days since the cats were left to fend for themselves for a while, there seems to be an uneasy truce developing. Gigi still needs time-outs.

I have not done any writing yet this month.

Friend to the blog Ian Rogers‘ TV deal is finally coming through. Big congrats to him.

Anathema magazine is crowdfunding. I’ve already subscribed. It intends to be a tri-annual speculative fiction magazine of work by queer POC.The people involved have pretty solid credentials, including this excellent anthology. A great way to discover some stuff you might not hear about otherwise. 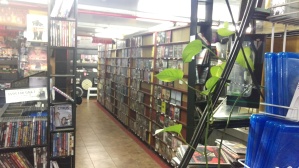 The shelves have been picked clean, but there’s still lots to be found at the Suspect Video closing sale.Only 5$ per title now.I’ll post a full list of my haul later, but I couldn’t resist a few more today including some mid-60s adaptations of Pushkin’s adaptations of Russian fairy tales.Similar movies I have seen include: Viy (the 60s Gogol adaptation, not the 21st century ones) and Ruslan and Ludmilla (both on YouTube) are highly recommended. A playlist of films by Alexandr Ptushko is worth checking out for more (only some are subtitled). They feature beautiful, surreal sets, and great coloration. Sometimes I think they speak in metre, which I also enjoy.