Don’t quit your day job unless you want books…

In which I collect books without having the time to read them all. Or more realistically, don’t quit your job if you want even more books, because an income helps.

As a going away present from the job I’ve occupied for roughly the last 2 years, I received two $50 gift certificates to Chapters-Indigo. I don’t really shop there often, because… well, they’re a chain store that’s moving away from selling books. This after they helped decimate “all” the little independent retailers around. They also often only have books I want in Kobo format, and I like my e-books DRM-free.

Here there be new books… 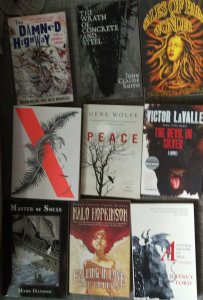 My big going away haul:

I left a couple of hardcovers (Indra Das‘ the Devourers, and Stephen Graham Jones‘ Mongrels) 1) because I’m not a fan of hardcovers and the space they occupy on my shelf, and 2)  that would’ve been 2/3 of my money. I also couldn’t find a number of books, like John Langan’s  -The Fisherman, because it’s not on the store’s radar. At all. So very inconsistent with their stock.

Victor LaValle – The Devil in Silver

I added a few other books this month too:

John Claude Smith‘s The Wrath of Concrete and Steel (along with a preorder for SP Miskowski‘s Muscadines). I got the Smith book in days despite it being listed for preorder.

Caitlin R. Kiernan‘s – Tales of Pain and Wonder. It was a long wait finding an affordable copy and a longer wait to get it delivered. I would really like to see a selected works that has a wider reach than her Subterranean books as well – even if only digitally, but the darkhorse stuff seems to be easily obtained.

And a few used books at the local  mega used bookstore (it’s 4 floors and also sells remaindered stuff, magazines, music,  and video, which is why it’s so huge).

Mark Hansom – Master of Souls and

Speaking of quitting jobs. I have a professional licensing exam coming up in October, and after negotiating some time off to complete a placement (required to graduate from my program, with a fast approaching deadline to graduate or get nothing substantial from my time and money), I needed more, and my boss just couldn’t give me any. Since then, I’ve been running around dealing with administrative B.S. relating to the order of my names on some pieces of ID – not enough of a big deal for the passport office to reissue a passport, but apparently enough to prevent me from graduating if not dealt with. I have since gained a tremendous amount of empathy for people who have to deal with this nonsense on a regular basis for whatever reason. Following that up with running around completing applications, submitting forms, getting things notarized, paying fees etc. It’s been practically a full-time job. Now I have just under 2 months to study 750 pages of material. There’s no way I’d have been able to deal with all this had I been employed.

With all that running around, I haven’t managed much reading for pleasure, or much painting – only starting a few new cultists and finishing some blue marble columns. Seeing as I’m hopefully going to be studying more effectively than today, I might not be posting too regularly over the next while. I’m also trying to plan a milestone birthday for my father, and a trip to France. We’ll see how all that goes.

I managed to attend a Chi-Series fundraising event where a number of people read from their juvenalia. It was pretty hilarious. It might also become a regular event, so keep an eye out! The authors wrote these texts at ages ranging from  elementary school to first-year university (a 300+ page novel related to a D&D campaign – I’m not sure if that admission was the bravest act of the night, but it was close.

And before I head back to studying, I’d like to share this great post by J.T. Glover about finding women who write horror fiction. It’s a great resource if you’re looking for X in X genre of writing.